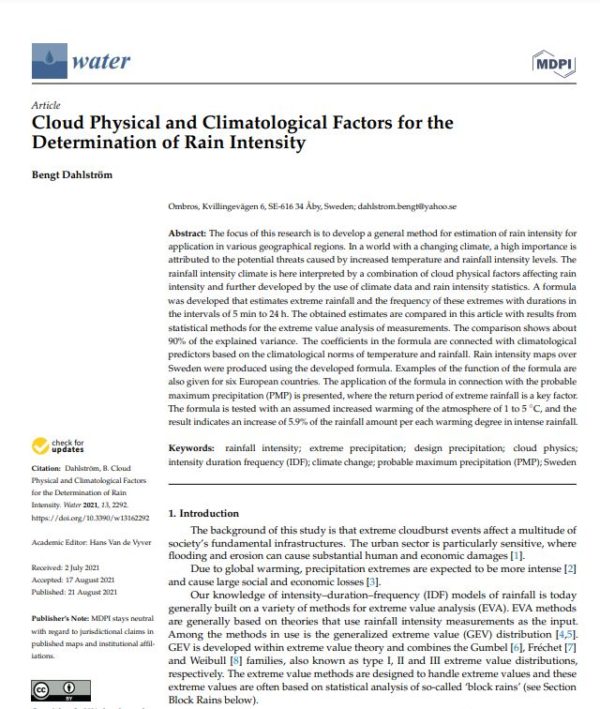 Cloud Physical and Climatological Factors for the Determination of Rain Intensity

The focus of this research is to develop a general method for estimation of rain intensity for application in various geographical regions. In a world with a changing climate, a high importance is attributed to the potential threats caused by increased temperature and rainfall intensity levels.

The rainfall intensity climate is here interpreted by a combination of cloud physical factors affecting rain intensity and further developed by the use of climate data and rain intensity statistics. A formula was developed that estimates extreme rainfall and the frequency of these extremes with durations in the intervals of 5 min to 24 h.

The obtained estimates are compared in this article with results from statistical methods for the extreme value analysis of measurements. The comparison shows about 90% of the explained variance. The coefficients in the formula are connected with climatological predictors based on the climatological norms of temperature and rainfall. Rain intensity maps over Sweden were produced using the developed formula. Examples of the function of the formula are also given for six European countries.

The application of the formula in connection with the probable maximum precipitation (PMP) is presented, where the return period of extreme rainfall is a key factor. The formula is tested with an assumed increased warming of the atmosphere of 1 to 5 ◦C, and the result indicates an increase of 5.9% of the rainfall amount per each warming degree in intense rainfall.